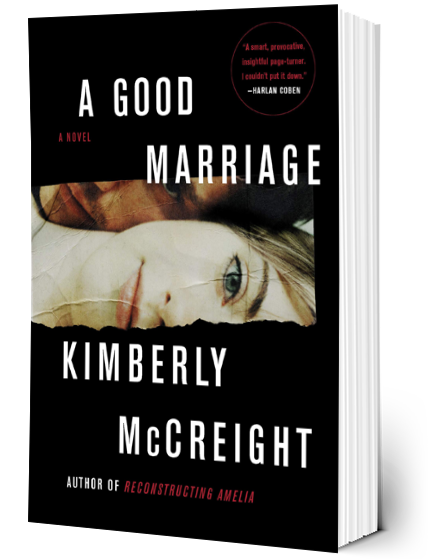 Big Little Lies meets Presumed Innocent in this riveting novel from the New York Times bestselling author of Reconstructing Amelia, in which a woman’s brutal murder reveals the perilous compromises some couples make―and the secrets they keep―in order to stay together.

In development at Amazon with Nicole Kidman's Blossom Films!
About A Good Marriage

Lizzie Kitsakis is working late when she gets the call. Grueling hours are standard at elite law firms like Young & Crane, but they’d be easier to swallow if Lizzie was there voluntarily. Until recently, she’d been a happily underpaid federal prosecutor. That job and her brilliant, devoted husband Sam―she had everything she’d ever wanted. And then, suddenly, it all fell apart.

No. That’s a lie. It wasn’t sudden, was it? Long ago the cracks in Lizzie’s marriage had started to show. She was just good at averting her eyes.

The last thing Lizzie needs right now is a call from an inmate at Rikers asking for help―even if Zach Grayson is an old friend. But Zach is desperate: his wife, Amanda, has been found dead at the bottom of the stairs in their Brooklyn brownstone. And Zach’s the primary suspect.

As Lizzie is drawn into the dark heart of idyllic Park Slope, she learns that Zach and Amanda weren’t what they seemed―and that their friends, a close-knit group of fellow parents at the exclusive Brooklyn Country Day school, might be protecting troubling secrets of their own. In the end, she’s left wondering not only whether her own marriage can be saved, but what it means to have a good marriage in the first place.

A Good Marriage on Goodreads

Praise for A Good Marriage

“McCreight’s law credentials lend authenticity to the legal proceedings and to Lizzie’s high-stakes tango with a formidable assistant district attorney eager to put her in her place. Lizzie’s narrative alternates with one that details Amanda’s movements for a few days before her murder, and McCreight expertly weaves multiple plot threads with a few sly red herrings, paving the way to a series of surprising, and satisfying, reveals. A smartly plotted and altogether successful union of legal thriller and domestic suspense.”
―Kirkus Reviews

“In Park Slope, everyone has a ‘good marriage.’ Yet after an annual party that often involves partner swapping, one wife ends up dead. Her husband might not be the best spouse, but he claims he didn’t kill his wife. If being a bad husband doesn’t make you a murderer, then who in this idyllic community is responsible? Liane Moriarty fans will love this one.”
―Selena Swink, Lake Public Library, Lake, MS

“A Good Marriage is a smart, provocative, insightful page-turner. I couldn’t put it down.”
―Harlan Coben, Run Away

“When a young woman with a dark past is found murdered, her husband is accused. But what secrets was she hiding, and what is going on behind closed doors in the very upscale, seemingly picture-perfect neighborhood of Park Slope? Part legal thriller, part domestic suspense, pure page-turner, this is a novel that will have you questioning everything you thought you knew about marriage.”
―Mary Kubica, The Other Mrs.

“A Good Marriage is a marvel — brilliantly and flawlessly constructed to grab the reader and not let her go until the very last page. I devoured this page-turner that is both a compelling mystery and a discerning exploration of love and marriage. Filled with emotional urgency, sharp insights and profound revelations, Kimberly McCreight’s newest novel is a dark, delicious read.”
―Jean Kwok, Searching for Sylvie Lee

“Full of dark secrets and surprising twists, A Good Marriage explores what lies beneath the surface of friendships, families, and communities. A captivating, can’t-put-it-down psychological thriller that gripped me from beginning to end.”
―Megan Miranda, The Last House Guest

“A Good Marriage is absolutely, positively riveting. I could not put this down! Kimberly McCreight has crafted a captivating, thrilling story that bolts out of the gate at a breakneck speed and never misses a step.”
―Taylor Jenkins Reid, Daisy Jones and The Six

“I loved A Good Marriage, a fast-paced page-turner that combines the complexity of a legal thriller with the emotional resonance of domestic suspense. You won’t be able to put it down!”
―Lisa Scottoline, Someone Knows

“Author Kimberly McCreight is a master of misdirection—even if you’ve already read a lot of domestic thrillers, you’ll be shocked by her jaw-dropping twists. Clear a spot next to Big Little Lies and The Couple Next Door—A Good Marriage is just as edgy and just as good.”
—An Apple Best Books of May

“It starts off as an open-and-shut murder case but turns into a riddle, wrapped in a mystery, inside an enigma. And it is AWESOME.”
—Book Of the Month Club Official Selection For May

Find much more in the BookClub Kit! 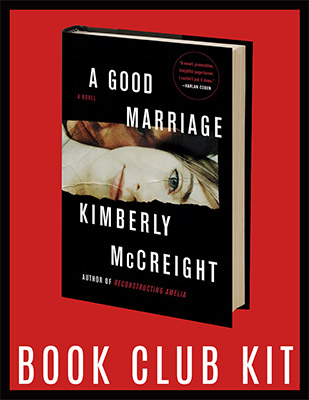