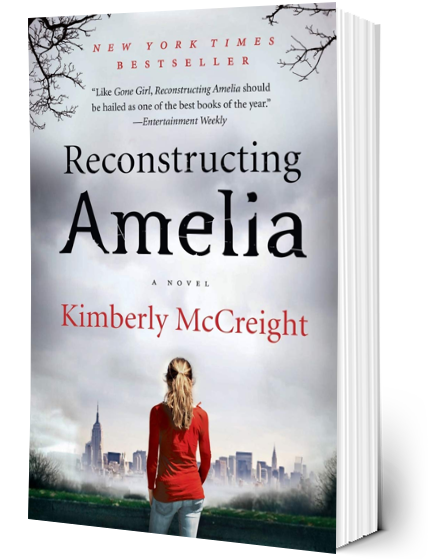 In Development at HBO with Nicole Kidman's Blossom Films!
About Reconstructing Amelia

Kate’s in the middle of the biggest meeting of her career when she gets the telephone call from Grace Hall, her daughter’s exclusive Park Slope private school. Amelia has been suspended, effective immediately, though the school refuses to say why, at least by telephone. They will say only that Kate must come get her daughter and she must come now.

And it must be Kate herself. Because no matter how loath she is to abandon her meeting, there no one for Kate to send in her place. For fourteen years, it has been just Kate and her daughter, the two of them alone and against the world. And for the most part, that has suited Kate just fine.

The whole ride out to Brooklyn, Kate wonders with growing annoyance what Amelia—so smart and successful and always so supremely responsible—could possibly have done to warrant a suspension, especially from the very liberal Grace Hall.

But soon all of it—the annoyance, the questions, her ridiculous meeting—drops away, forgotten when Kate turns that last corner and sets eyes on the police officers, and the fire trucks and that ambulance, sitting there, doors hanging open. Not rushing anywhere.

Because by then it’s already too late for Amelia. And for Kate.

An academic overachiever despondent over getting caught cheating jumps to her death. Impulsive suicide, tragic and awful, but far more common than anyone realizes. At least that’s the story Grace Hall tells Kate. And clouded as she is by her guilt and grief, it is the one that she believes. That is, until she gets an anonymous text : She didn’t jump.

Told from Kate and Amelia’s alternating points of view, as well as Amelia’s e-mails, texts and Facebook posts, Reconstructing Amelia tells the story of why Amelia was on Grace Hall’s roof that day. And how she ended up plunging to her death.

It is a story of secret first loves, old friendships and an all girls club steeped in tradition. It’s about having the strength to accept your own truth, even when you’re betrayed by the people you trusted most. But most of all Reconstructing Amelia is the story of how far a mother will go to vindicate the memory of a daughter whose life she couldn’t save.

“Just finished a fantastic novel—Reconstructing Amelia by Kimberly McCreight. So. Well. Done. If you liked Gone Girl, you’ll love this too.”
— Jodi Picoult

“Wow! I was pulled in after reading the first page…. It’s sort of a thriller/prep school teen drama that is full of secrets.”
— People.com Staff Pick

“Like Gone Girl, Reconstructing Amelia seamlessly marries a crime story with a relationship drama. And like Gone Girl, it should be hailed as one of the best books of the year….In her debut novel, Kimberly McCreight spins a riveting narrative that somehow delivers thoughtful commentary on working-mom guilt, bullying, police corruption, and Gossip Girl. Every single twist in Reconstructing Amelia is clever, and rightfully earned.”
— Entertainment Weekly, Grade A Review

“We love a powerful debut, and this is just that…. It’s Mean Girls meets The Secret History meets the cyberbullying case of Amanda Todd — and it’s unputdownable.”
— Daily Candy

“Reconstructing Amelia will keep you hooked till the last page.”
— BookPage

“Alternating perspectives from Kate and Amelia reveal the inner lives of a woman trying to balance motherhood with a demanding career and a teenager struggling with her blossoming sexuality while dealing with severe bullying . . . this is a compulsively readable novel that will appeal to Jodi Picoult fans.”
— Library Journal Review

“McCreight’s haunting debut will stay with you long after you are done reading. The main characters feel relatable and it is easy to feel sympathy for their situation. Even though the ending is known right away, you’ll hope against hope for a happily ever after for the characters that you’ve become so invested in. This fantastic book whets your appetite for more from McCreight.”
— RT Book Reviews (April Top Pick)

“Vivid, disturbing and timely, McCreight’s novel explores the world of cyber bullying and the devastating impact it has on one young girl’s life. Chilling and suspenseful, with a knockout ending you won’t see coming, this is the kind of book you’ll be pressing into everyone’s hands.
— Caroline Leavitt, New York Times – bestselling author of Pictures of You and Is This Tomorrow

“In this heart-wrenching story of secrets and betrayal, Amelia’s mother, Kate, is taken places no parent should ever have to go as she tries to piece together the truth about her daughter’s tragic death. McCreight captures the complexities, cruelty, and angst of teenage girls so well my stomach was in knots. What really happened to Amelia? You’ll find yourself staying up all night to find out.”
— Jennifer McMahon, New York Times – bestselling author of Island of Lost Girls

“Reconstructing Amelia is a brilliantly plotted and beautifully written literary suspense, as enthralling as it is moving. With remarkable insight and sensitivity, McCreight explores the complexities of what it means to be both a mother and a daughter in this confusing, often terrifying age of social media and, in the process, tells a riveting, unforgettable story.”
— Andrew Porter, Flannery O’Connor Award-winning author of The Theory of Light and Matter and In Between Days

“Fast-paced and suspenseful . . . a page-turning mystery and thriller will appeal to fans of Jodi Picoult.”
— School Library Journal

“An elaborately plotted mystery. . . . A harrowing story. . . .McCreight does a fine job of building suspense and creating characters, notably Kate and Amelia, whom the target audience—both adults and older teens—will care about and empathize with.”
— Booklist

“The real story of Amelia’s life and death emerges slowly, through a creative blend of Kate’s present, Amelia’s past, and such varied communication methods as texts, e-mails, blog entries, and Facebook status updates . . . McCreight portrays the darkness of adolescence, complete with doomed love, bullies, poisonous friendship, and insecurity. Fans of literary thrillers will enjoy the novel’s dark mood and clever form.”
— Publishers Weekly

“Kimberly McCreight has written a gripping mystery that moves as swiftly as a luge ride under its heavy topical weight. Tackling a thorny issue of school bullying head-on, Reconstructing Amelia entertains even as it explores the hardest kind of death to accept—the death of a child.”
— Emily Raboteau, author of The Professor’s Daughter and Searching For Zion

“A multilayered legal thriller . . . Comes to a seamless and unanticipated conclusion.”
— Kirkus Reviews

“Kimberly McCreight has crafted a heartrending and intricate novel that explores the turmoil of adolescence. Reconstructing Amelia is so riveting that I read it in one sitting.”
— Masha Hamilton, author of 31 Hours and The Camel Bookmobile

“Why She’ll Be Big: HarperCollins’ bold decision to lead its spring lineup with Reconstructing Amelia speaks volumes about the publishing house’s confidence in McCreight. The litigator-turned-short story writer unveils her first novel April 2. In it, she draws from her own experience as a Brooklyn parent to examine how far a mother will go to cling to the image of her lost daughter.”
— Lanford Beard on including Kimberly in Entertainment Weekly’s 13 to Watch in 2013 List

For three months, I’d been faithfully taking my pre-natal vitamins, avoiding all unapproved foods and keeping my heart rate safely below 140 beats a minute. Yet, preparing for pregnancy felt more like an innocent diversion, a charming hobby. I didn’t really believe that my body would work—when called upon—the way health class had assured me it would. But it did, the very first month we tried to conceive. And so there I stood in my squat, bathtub-less bathroom, a positive pregnancy test pinched in my already puffy fingers. And all I could think was: my God what have we done.

I’d always known that I wanted a family of my own, but in my fantasies, my big brood always included college-aged children. I imagined us gathered around a picturesque Thanksgiving table in a beautifully restored farmhouse having spirited discussions about politics and art. The first eighteen years of child rearing seemed something it was best not to ponder too deeply. I’d never been able to relate to small children, even when I was one of them, and I was positively petrified of babies. The first time I held one was a month before I became pregnant myself and I’d considered it a rousing success that the child survived.

But once I got over the initial shock of being pregnant, I did convince myself that parenting would come more naturally with my own child. I’d always been a quick study, and I wasn’t afraid of a little hard work. I’d been a lawyer and a writer and had traveled all over the world. I’d climbed a mountain and run a marathon. I’d learned to speak Japanese and taught myself to bake. If I could do all those things, then surely with enough time and effort, I could learn to properly care for a child. Surely.

And I did, eventually. I learned to care for two, in fact. I consulted books and wise friends and doctors, but mostly it was trial and error. It certainly has not been easy. There have been countless sleepless nights and voluminous tears—theirs and mine. So far, we have survived endless colic and reflux and trips to the ER for stitches. We’ve held our breath through first steps and first days of school and first best friends. I’ve changed countless diapers, bandaged endless scraped knees, assessed the severity of numerous head wounds and have been thrown up on more than I ever would have thought possible.

Of course, the physical demands—aggravating and exhausting though they sometimes may be—is actually the easy part of parenting. It’s being a mother that’s so very hard. Just the idea of being that person, to another living being, forever, gives me vertigo. And then there are the actual responsibilities. I’m supposed to help my children grow into happy people. But what makes a person happy? Success, love, freedom? If I’m still trying to figure that out, how can I possibly teach my daughters? What am I to do when their fears terrify me? How can I make them feel loved unconditionally and completely in those dark moments when I’m not sure I like them very much?

And how on earth—in a world so filled with dangers, big and small—will I ever keep them safe?

More than once, I’ve turned a corner on the way to pick up one of my children and seen an ambulance parked in front of one of their schools. Or at least that’s the way it looks, from several blocks away, down a busy Brooklyn avenue. Every time, I tell myself that my child has not accidentally eaten one of those cashews that she is so allergic to or fallen off the monkey bars or choked on a carrot. No, my child is fine.

And yet, I always walk a little faster, eyes locked on the ambulance, until I can confirm that it’s actually just parked, off-duty. Perhaps, I worry because I’m especially fatalistic. But I don’t think so. I think I worry because, deep down, I know the truth: that there is only so much I can do to protect my girls.

That’s what I thought a couple years back when I read about the star student and athlete who committed suicide by jumping out a window at Dalton. It’s what I thought about when I first heard about Tyler Clementi’s tragic leap from the George Washington Bridge after being surreptitiously taped. And it was brought back to me again when New Jersey teen Lennon Baldwin hanged himself allegedly in response to bullying.

My novel is told from the alternating perspectives of both Amelia and her mother Kate, to show how children—no matter how well-adjusted, no matter how well-loved—can be so easily singled out for abuse and suffer its inevitably heartbreaking consequences. Reconstructing Amelia explores how our children can get so terribly lost, despite the fact that we’re trying our best to keep them found.