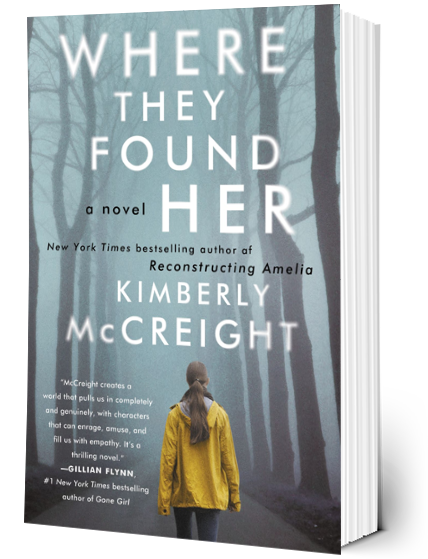 Where They Found Her

From the author of the New York Times bestseller and 2014 Edgar an Anthony nominee Reconstructing Amelia comes another harrowing, gripping novel that marries psychological suspense with an emotionally powerful story about a community struggling with the consequences of a devastating discovery.

About Where They Found Her

At the end of a long winter in well-to-do Ridgedale, New Jersey, the body of an infant is discovered in the woods near the town’s prestigious university campus. No one knows who the baby is, or how her body ended up out there. But there is no shortage of opinions.

When freelance journalist, and recent Ridgedale transplant, Molly Anderson is unexpectedly called upon to cover the story for the Ridgedale Reader, it’s a risk, given the severe depression that followed the loss of her own baby. But the bigger threat comes when Molly unearths some of Ridgedale’s darkest secrets. Meanwhile, Sandy, a high school dropout, searches for her volatile and now missing mother, and PTA president Barbara struggles to help her young son, who’s suddenly having disturbing outbursts.

Told from the perspectives of Molly, Barbara, and Sandy, Kimberly McCreight’s taut and profoundly moving novel unwinds the tangled truth about the baby’s death, revealing that these three women have far more in common than they realized. That the very worst crimes are committed against those we love. And that—sooner or later—the past catches up to all of us.

Where They Found Her on Goodreads

Praise for Where They Found Her

“A roller-coaster of a novel, with finely drawn characters whose lives unravel when a dead newborn is found in their affluent college town—and the past refuses to stay hidden. How lucky for us readers—McCreight has once again proven herself to be an insightful writer capable of taking us on a hell of a ride.”
— Jodi Picoult, #1 NYT bestselling author of Leaving Time and The Storyteller

“With Where They Found Her, Kimberly McCreight doesn’t just give us an intense, interwoven, multigenerational, multi-household mystery (as if that isn’t enough). She creates a world that pulls us in completely and genuinely, with characters that can enrage, amuse and fill us with empathy. It’s a thrilling, lovely novel.”
— Gillian Flynn, #1 NYT bestselling author of Gone Girl

“McCreight is quickly rising into a league with the best purveyors of the stuff, fromJodi Picoult to Harlan Coben.”
— USA TODAY

“Completely riveting. A brilliant thriller which engages fully in the modern world, but still manages to give that satisfying feeling of a classic detective story.”
— Emma Healey, Costa Award winning author of Elizabeth is Missing

“Coiled as tightly as a spring, Where They Found Her begins with a small town’s tragedy and doesn’t relent until every secret, and character, is exposed. Kimberly McCreight has written another satisfying, dark page-turner that pounces off the page.”
— Miranda Beverly-Whittemore, New York Times bestselling author of Bittersweet

“Where They Found Her is a fast-paced, intensely moving story filled with complex characters who drag you unresisting into their dark and tangled lives. It kept me guessing until the very last chapter.”
— Chevy Stevens, New York Times bestselling author of Still Missing and That Night

“Where They Found Her is the intensely gripping story about the power of secrets spilling from one generation to the next, growing larger and darker until they swamp everyone in their path and sweep to a shocking, surprising end.”
— Carla Buckley, author of The Deepest Secret

“Genuinely suspenseful and disturbing; McCreight delivers a provocative, timely novel that reminds us that sometimes the things that shine the brightest have the dirtiest underbellies.”
— Kirkus (Starred Review)

“One of the most gripping novels of the season.”
—Barnes and Noble Review

“This tightly spun sophomore effort will please fans of Amelia. McCreight has a keen grasp of the epistolary technique and is adept at providing readers the puzzle pieces they need to build a broader picture.”
—Library Journal

“With Where They Found Her, she has delivered another eerie, harrowing read. Through flashbacks and multiple narrators—some more reliable than others—McCreight weaves a deeply satisfying spellbinder that unfolds deliciously to the very last chapter.”
—Bookpage

“Fans of Gillian Flynn’s mean and masterful Gone Girl, rejoice, because this is the one you’ve been waiting for. . .in a tour de force of literary talent that will grip you from page one and carry you—sometimes unwillingly—into the dark heart of this mystery.”
—Barnes and Noble

“Keeps us guessing right to the end.”
—Charlotte News & Observer

“Suspenseful…fluent in the text messages where the dramas of modern life play out.”
—USA Today

“A dead newborn in the woods recalls painful memories for mourning reporter Molly Sanderson in this twisting thriller in which nobody is what they seem. Was the baby that of a college student in this upscale, upstate New York town? Or is a townie to blame? Even seasoned mystery readers won’t see the twists coming in this fast-paced read filled with unreliable narrators.”
—Cleveland Plain Dealer

“Author Kimberly McCreight has got the literary bull by the horns. Impressing readers and critics with her debut thriller Reconstructing Amelia in 2013, McCreight and HarperCollins have wasted no time publishing an equally gripping second thriller.”
—A Novel Narcoleptic

“I love when I can read a book and NOT figure it out. Nowadays some reads are so easy to figure out that it kind of ruins the joy of it all…this is why Kimberly McCreight has become one of my favorite new authors. I fell in love with her writing since her first book Reconstructing Amelia and this new one doesn’t disappoint either. So do yourself and favor and if you haven’t had the pleasure of reading her novels what are you waiting for?”
—A Southern Girl’s Bookshelf

“I’m thrilled to say I enjoyed this book as much as or more perhaps than her first. I believe McCreight has proven her ability to weave a story that pulls you in and keeps you turning pages till the very end.”
—Anita Loves Books

“These characters are believable, they’re human, they’re imperfect. They are everything a reader demands in a good thriller. And the breadcrumbs? Oh my, the breadcrumbs. A visual clue that may or may NOT lead you to the guilty party. In Kimberly McCreight’s nimble hands, a single word, innocently tossed out for character description, made me wonder more than once…”could it be her? ” followed by “oooh, now that watch must mean something, see, wait, umm, does it?” Tip of the hat, Kimberly, you had me doubting myself.”
—Backseats and Airports

“Where They Found Her packs a powerful punch and leaves a lasting impression.”
—Jen’s Book Thoughts

“A must read that will tug at your heart strings and make you wonder if you really know your friends, loved ones and even yourself.”
—Chicks Dig Lit

Years ago, I caught a snippet of a talk show segment about a woman who had been accused of killing her newborn. Already a parent to one at the time and pregnant with my second child, this story horrified me. Yet I also felt incredible pity for this young woman. Here I was secure, with a partner, a strong education and good socioeconomic standing, and still every aspect of motherhood overwhelmed me. All of my conflicting feelings in that moment – the guilt about my own limitations, the fear, the sympathy – sparked inspiration for Where They Found Her.

Where They Found Her is set in the fictional university town of Ridgedale, New Jersey. It is narrated from the perspectives of three different women: new resident Molly, a fledgling freelance reporter who is still recovering from a traumatic, late term stillbirth; Barbara, wife of the local police chief and the town’s resident Sanctimommy; and Sandy, a high school dropout from the wrong side of the tracks who is desperately trying to pull herself up by the bootstraps without any support from her dangerously unreliable mother. The story begins when the body of a newborn is found in the woods near the prestigious University campus, and Molly is called upon to cover the story. Meanwhile, Sandy’s troubled mom has gone missing, and Barbara’s young son is suddenly off the rails. The truth of the baby’s death lies in the unexpected intersection of these three women’s past and present.

The news today brims with stories about stories of sexual assaults on college campuses that are never prosecuted, and stories of young women who find themselves pregnant and alone and terrified. These current events are where I found many threads of my mystery. But the heart of the story was fueled by my own questions about motherhood. I’ve never had a mother in the traditional sense so having children of my own has been—in ways big and small—forging into unknown territory. What I found most strange after having my first daughter—aside from the trials and tribulations of daily caretaking—was the unexpected pressure of the new role I had been thrust into: Mother complete with its sky-high expectation, draconian limitations, and, yes, so much joy.

I did not come to parenthood with a clean slate. I don’t think any of us do. We are all trying to either emulate a history we treasure or avoid a past we would rather forget. Can any of us escape the weight of that? More than anything, I wrote Where They Found Her because I wanted to know: sooner or later does the past really catch up to all of us?